Agriculture forms the backbone of Benin’s economy. Seventy percent of Benin’s population depend on small-scale agriculture, and it accounts for over a third of the country’s GDP. Increasing land degradation, however, threatens agricultural productivity and the livelihoods of rural farmers.

An estimated 62% of agricultural land in Benin is now affected by soil degradation. Most farms are small or medium scale, on average less than two hectares in size. Maize is the most important staple crop for about 85% of households in Benin. Cotton is the main cash crop, and while it generates income for many farmers, it also drives deforestation, overuse of pesticides and artificial fertilizers, and, consequently, soil degradation and water pollution. Farmers are increasingly affected by climate change, which is likely to lead to higher temperatures and changing rainfall patterns. This may result in both drier soils and erosion due to flooding. Investment in sustainable land management is therefore urgently needed to increase farmers’ resilience to climate change and to restore soil health. The northern regions of Benin are especially vulnerable to climate change. The degradation of land there leads to migration, placing greater pressure on land and urban settlements in southern Benin.

Since 2015, TMG Research has worked closely with the GIZ programme Protection et Réhabilitation des sols pour améliorer la sécurité alimentaire (ProSOL) part of the German Government-funded One World – No Hunger initiative. In this collaborative adoption research, TMG supported ProSOL with transdisciplinary research on the adoption of SLM practices by farmers. One focus was to apply lessons learned from past development projects to the ProSOL implementation approach and critically reflect with farmers on the promotion of SLM technologies. In thematic studies we looked at gender-specific barriers and the transfer of knowledge between farmers, especially between programme beneficiaries and non-beneficiaries.

For nearly four years, TMG Research worked the villages of Kabanou and Sinawongourou, located in the communes of Kandi and Bembèrèkè in northern Benin. These were selected in consultation with the ProSol team. The study of gender-specific barriers to SLM adoption was extended to include the communes of Djidja and Bantè in the south of the country. 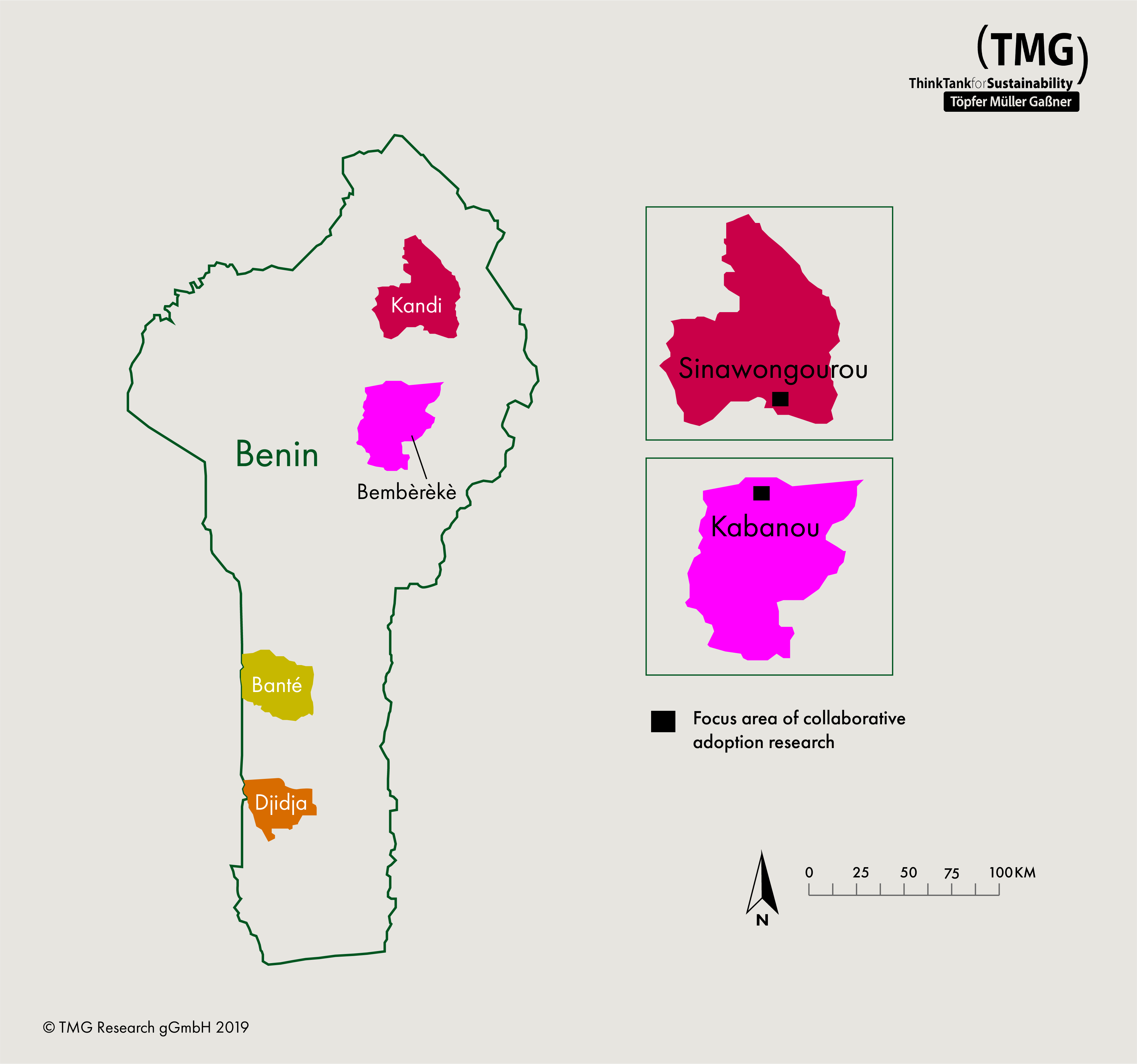 There has been a low uptake of SLM practices by farmers in Benin. Public agricultural extension services tend to focus on larger farmers and the cotton crop, which is not farmed sustainably. Access to information, training and materials for subsistence farmers and food crops is limited. For SLM programmes such as ProSOL, the main challenge is to reach beyond a selected groups of model farmers. TMG Research, in close collaboration with GIZ-ProSOL, has worked to improve technology diffusion from direct project beneficiaries to the rest of the community. The Tem Sesiabun Gorado technology diffusion model addresses the shortcomings of conventional agricultural extension approaches and seeks to improve the active uptake of SLM practices. ProSOL has adopted the model as a basis for its upscaling strategy in 401 villages throughout Benin.

The work of TMG Research in Benin involved close collaboration with GIZ-ProSOL. The technology diffusion model was developed and piloted in collaboration with national and local civil society organisations in the fields of environmental education (INUDE), social well-being and environmental protection (CERABE), and sustainable development and social well-being (ALAFIA ONG). These community-based organisations have long worked with communities in the north of Benin and to ensure that those communities continue using the Tem Sesiabun Gorado model.