Catalysing the diffusion of sustainable land management with a community-based strategy: The Tem Sesiabun Gorado model in Benin

Entrusting communities with leadership in the sharing of knowledge and practices for sustainable land management (SLM) can catalyze the diffusion of SLM technologies. In northern Benin, TMG has taken a first step towards improving existing farmer-to-farmer extension strategies. The community based Tem Sesiabun Gorado (TSG) model has scaled from 49 initial project-trained farmers to 1,055 in two villages in only two years.

Tem Sesiabun Gorado means community-based agent of soil restoration in Bariba, a language spoken in northern Benin. Over the last year, more than 1,000 farmers have been trained in SLM practices by their peers in a community-based approach; 380 of these farmers are women. The pioneer process in the villages of Kabanou and Sinawongourou was co-developed with the communities and the GIZ programme for Soil Protection and Rehabilitation for Food Security (ProSol) in Benin with the support of partner NGOs on the ground.

The TSG model addresses some of the main shortcomings of other SLM promotion strategies which often result in the exclusionof less privileged farmers, especially women and youth who usually do not own enough land to host demonstration fields for SLM technologies. 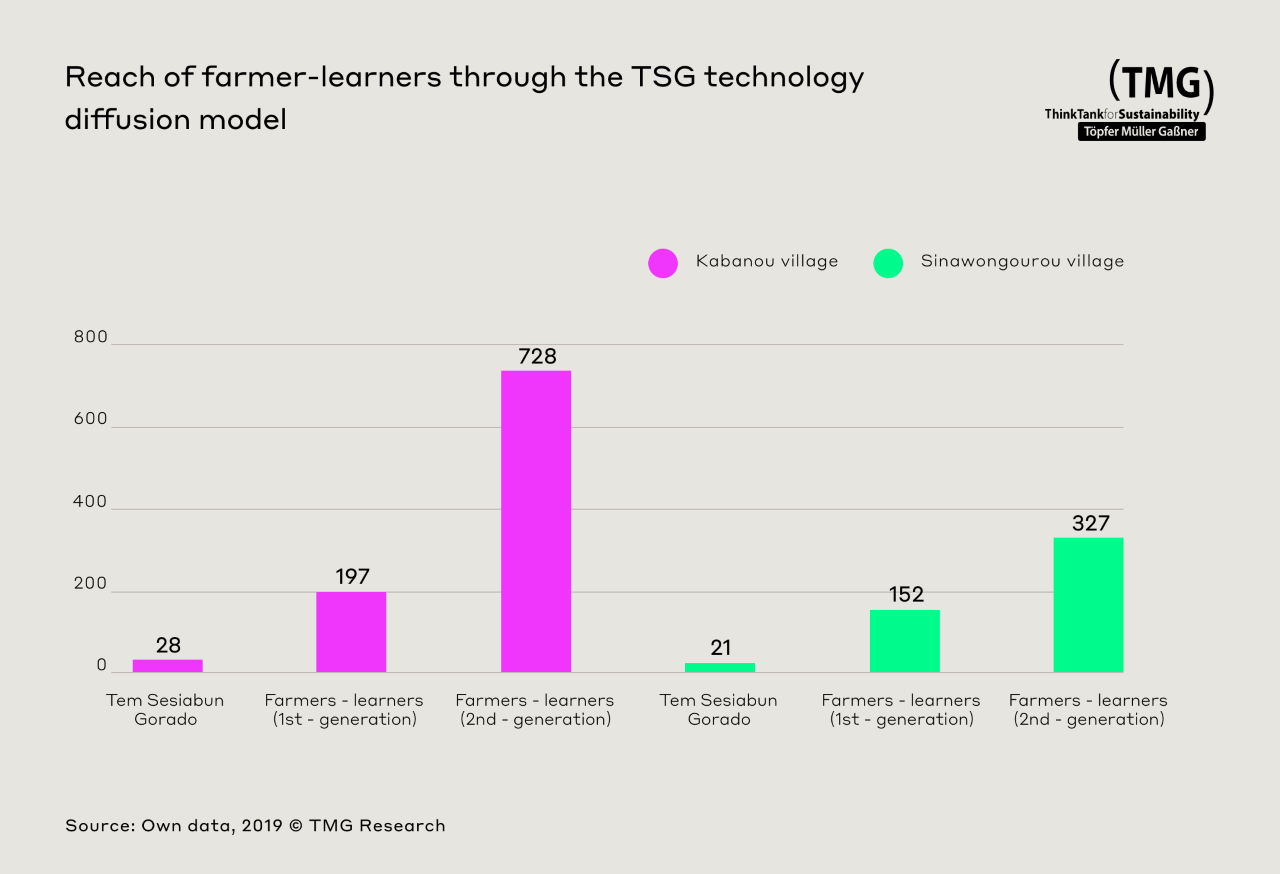 The model in a nutshell

The strategy developed by TMG and GIZ in northern Benin is a different take on farmer-to-farmer-extension. Trained farmers are tasked with not only passing on information and training to other farmers, but also following them on the ground to ensure knowledge implementation. The approach builds on the rich experience of community-based services in the health sector in Benin.

At the heart of the process is the Tem Sesiabun Gorado. The communities elect the TSGs, who receive free training, farm inputs, resources, and professional technical support on behalf of their communities; SLM programmes and state-based agricultural services provide these resources. The process creates a kind of social debt: an obligation to pass on the knowledge, skills and inputs they received. Each Tem Sesiabun Gorado publicly commits to training five farmer-learners in the SLM technologies they have learned in order to repay the social debt.

Farmer-learners who successfully experiment with SLM subsequently take up the role of a TSG themselves, assuming responsibility for five new farmer-learners (i.e. a second generation of farmer-learners). In this way, the project’s effects are multiplied, with each generation consisting of five times as many farmer-trainers and trainees as the previous generation. This process can be continued with a minimum of coaching from field technicians until a critical number of farmers is reached within a given location, after which it becomes self-replicating. 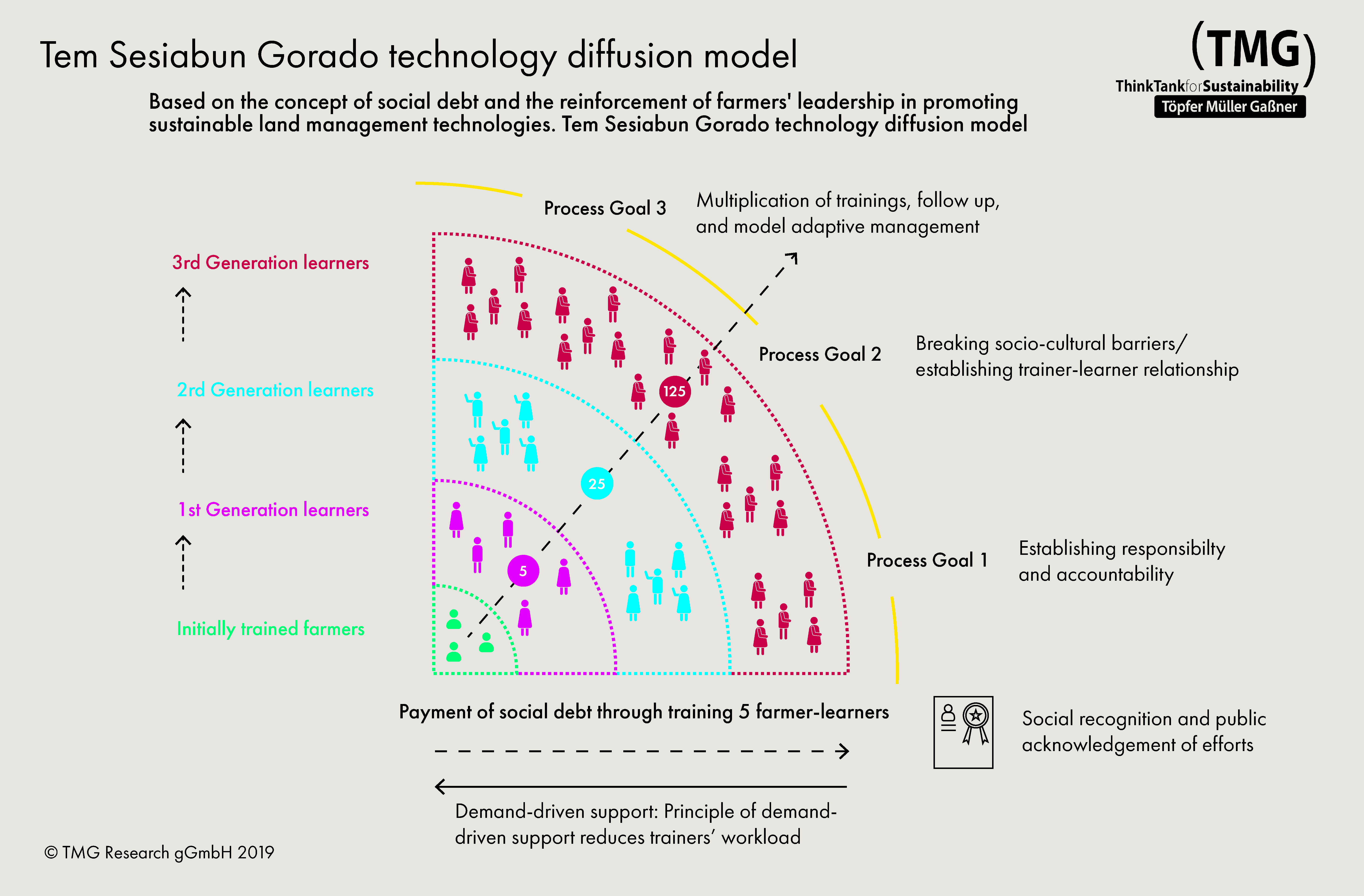 #2 Ensure long-term motivation by realistic expectations and agreed responsibilities
In the process of discussions in the community, the workload and expectations towards the TSGs needs to be openly discussed. In Kabanou and Sinawongourou, the number of five farmers was agreed upon during village consultations. An agreement was also reached to limit the timeframe of the process to two growing seasons in order to minimize the drop-out rate of farmer-trainers. Facilitators must support the building of trust and respect between farmer-trainers and learners: trainers must understand their responsibilities, while learners also take an active role and ask their Tem Sesiabun Gorado for support. This approach reduces the farmer-trainers workload, which in turn help ensure long-term motivation.

#3 Strengthening accountability via the principle of social debt
Being selected by the communities and receiving trainings and inputs on behalf of their peers creates a social debt for the Tem Sesiabun Gorado, who thus publicly commit to pay the debt forward by passing on their knowledge to non-trained farmers. Thus, this principle increases accountability and commitment.

The pilot trial of the TSG model in northern Benin shows that including women and men equally as community-based agents reduces gender imbalances among farmer-learners across generations of learners. In the trials in Kabanou and Sinawongourou, the gender ratio among TSGs clearly impact the gender ratio among first and second generation farmer-learners. Assigning leadership roles to women addresses the challenge of increasing the number of women actively practicing SLM. 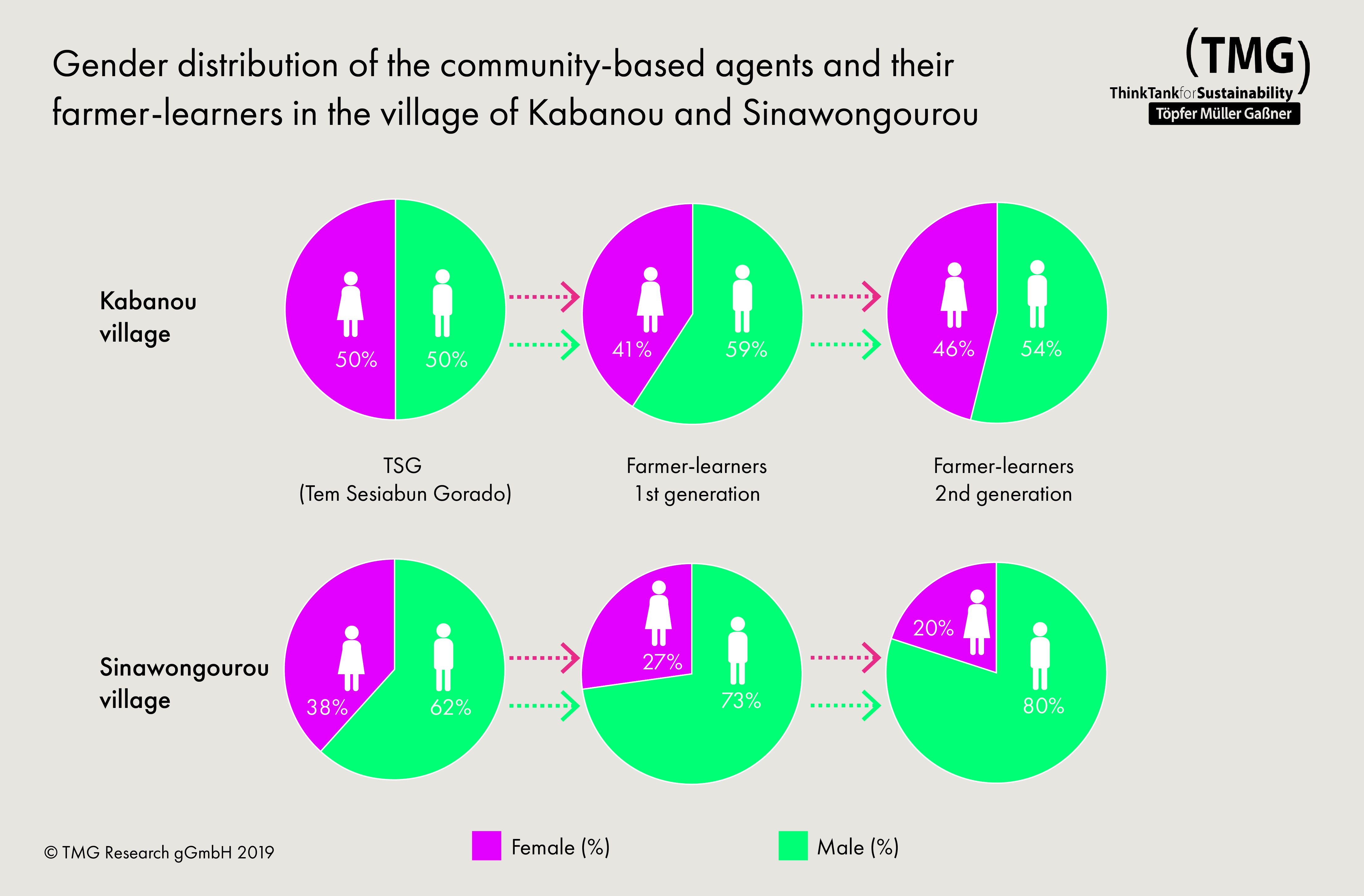 This guide is designed to facilitate understanding, and implementation of the Tem Sesiabun Gorado (TSG) model, a farmer-led knowledge diffusion approach.

The Tem Sesiabun Gorado (TSG) model is a farmer-to-farmer technology diffusion model. It seeks to address common shortcomings of conventional farmer-to-farmer extension approaches, in particular with respect to accountability mechanisms and sustaining the motivation of farmer trainers.