Farmers running the risk of losing their land cannot invest in soil management in the long run. Women in western Burkina Faso are in this situation. Together with our partner GRAF, we have developed a social innovation to improve women’s tenure situation within the family farm. In the pilot village of Tiarako, western Burkina Faso, over 200 women today have, individually or collectively, secure access to 189 fields amounting to a total of over 400 ha.

Edwige farms a small plot of land in Tiarako, a village in western Burkina Faso. After every harvest, she must negotiate with her husband whether she can keep her land. Sometimes her husband decides to give her another, less fertile plot of land because he needs all the good land for growing cotton – Burkina Faso’s primary agricultural export good.

THE CHALLENGE: The gender gap in land policy implementation
Burkina Faso’s legal framework for land governance recognises equal rights for men and women. By law, women, just like men, can obtain formal land possession certificates and inherit land. However, due to weak land governance institutions, the land law has so far only been implemented in 112 out of 351 districts. Farmers in Tiarako don’t have access to governmental land registration services, as their district administration has not been equipped yet with the required human and financial resources.

But even when land ownership is formalised and secured, it is frequently done in the name of the family head, leaving other family members without formal land rights. Therefore, married women remain disadvantaged, and patriarchal control of land is likely to persist even where the land law is enforced.

THE SOLUTION: A complementary instrument to the land law
In partnership with the Burkinabé NGO GRAF and local stakeholders, we have developed a mechanism in Tiarako that builds on traditional land governance systems. Essentially, arrangements on land use rights are negotiated between the male head of household and his spouse or other female relatives. The goal is to change existing tenure arrangements towards enhanced equality and security for women.

THE APPROACH: A step-wise approach to securing land access for women
Implementation was gradual (Figure 1). The first phase was dedicated to raising awareness of the economic benefits of women’s secured access to land, followed by negotiations of land use agreements. 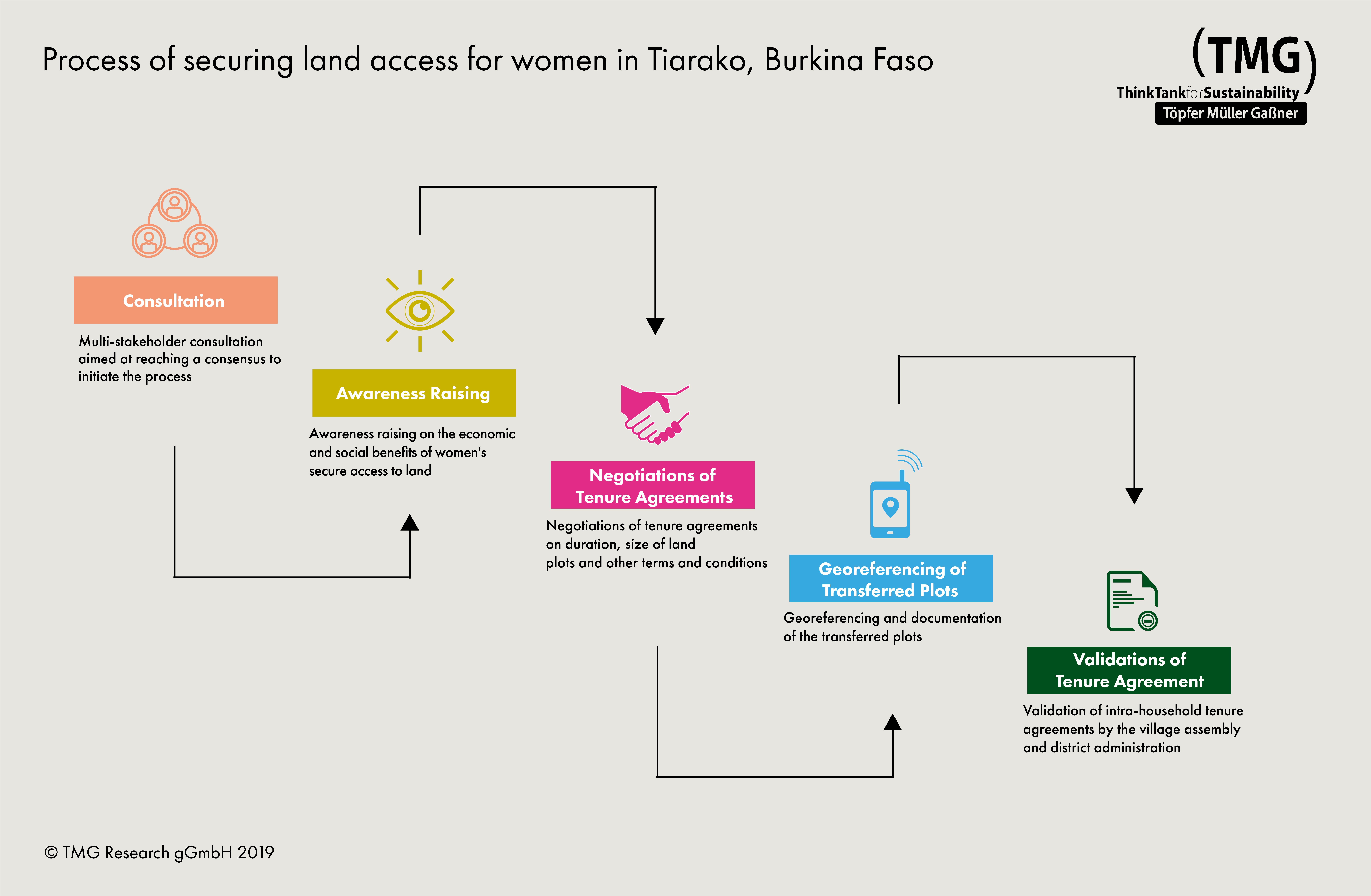 GRAF experts facilitated dialogues through village assemblies, focus group discussions, and one-to-one conversations. After men and women had agreed on the transfer of land use rights, the secured plots were GPS-referenced, documented and validated by the village assembly under the presidency of the mayor.

SUCCESS FACTOR #1: Strong involvement of local
Previous research by GRAF and TMG underscored that weak involvement of local institutions constitutes a major bottleneck to the sustainability of rural development projects in Western Burkina Faso. Local actors usually only get involved after the project design phase, and even then their participation is limited. Therefore, we paid special attention to effective and inclusive participation of local actors. These actors included the local community, their traditional leaders, village committees on land governance, the district administration, and public agricultural advisory service providers. Encouraging and enabling them to assume key roles allowed them to build ownership over the process. Their involvement from the beginning of this initiative gave them decision-making power over the design and implementation.

SUCCESS FACTOR #2: Support and commitment by men
The men in the village played a crucial role in the implementation of this process. Participation reached a tipping point after customary leaders had been convinced of the proposed mechanism. Many other men followed these first adopters  in ceding more secure land use rights to their women.

GRAF experts’ time investments in discussing the role of the woman as an important contributor to the family’s income and well-being with the villagers was important in convincing men. Men were willing to break away from patriarchal practices due to the prospects of economic household benefits. Likewise, the bond built by GRAF experts speaking the local language increased men’s trust in this process.

Watch a short summary about the land securing process in Tiarako

As heads of the farm, men were able to suggest terms and conditions of the land tenure agreements. Typically, most men demanded that women only have secured land use rights as long as they are part of the family. Granting this first level of control to men and respecting norms related to the traditional bond of marriage was important to encourage men to buy into the idea of improving the land tenure situation for women. In return, many men accepted women’s demands for a larger area of allocated land, which would allow women to not only produce for subsistence use but also for the market.

Finally, the support and endorsement of the municipal administration and customary chiefs played a crucial role in men’s willingness to open up to new ideas of managing and controlling land within the family. Now, one year after this initiative has been piloted, men in Tiarako are proud that they gave land to their wives.

“Between us men, we tease each other. Those who have given land to their wives say to those who have not: ‘I gave the land to my wife. I understood things. What about you?’“

SUCCESS FACTOR #3: Social legitimacy
The negotiated tenure arrangements resulted in a preceding and facilitating document for Rural Land Possessions Certificates, a so-called Procès verbal of a Village Assembly. As such, it is not a legal document but rather an accord validated by the village assembly and recognised by the municipal administration. In case of contestation, the village’s conciliation committee members intervene to mediate disputes.

Issuance of formal land titles to women was neither possible nor desirable within this pilot process. Local institutions responsible for issuing land possession documents did not exist in the region. And formal land titles do not automatically result in social acceptance within a community. Land rights arrangements agreed to by the community affected can fill that gap, according to GRAF founding member Dr. Sanou.

“Someone can have a land title but not be able to exploit the field simply because on the village level the people do not agree with him or her managing this field.”

Embedding the social innovation in socio-cultural realities, such as the need for endorsement of traditional leaders, was important to create social legitimacy for the tenure arrangements. Villagers’ decision-making power over the process and the consensus reached by the villagers further underpinned the legitimacy of these arrangements.

SUCCESS FACTOR #4: Scalable local action for achieving global SDGs
This process of securing land access for women is an excellent example of how local processes can drive global SDG implementation. Strong involvement of actors responsible for implementing rural development initiatives, such as public agricultural extension institutions and the district administration, is key to bringing these initiatives to scale. For example, by means of their very active participation. By participating, the district administration acquired the knowledge to replicate this process in other villages. The social innovation developed in Tiarako offers good prospects for replication and up-scaling due to its resource-efficiency and possibility of implementation in the absence of formal land governance institutions.

The impacts are quickly palpable – not only in abstract numbers, but people’s lives. Today, Edwige has permanent use rights to four hectares of land. She plans to grow maize, beans, sesame, and peas, and she hopes to support her children’s school education from the harvest revenues. And the men in her life are pretty happy about that, too.

Securing land access for women. An innovative process based on social legitimacy

The purpose of this guide is to provide target actors with a tool for the conduct of an alternative process for securing access to land for women.